Each awardee was recognised for their enduring and active relationship with the Trust and for inspiring others to contribute in a similar way, or in some cases to reconnect with their own Fellowship journey.  The Churchill Fellows who received the award in 2019 are Patricia Corby CF 1978 from Tasmania, Ian Krimmer CF 1992 from New South Wales, Mick March CF 1969 from the ACT, Anne McCrudden CF 1998 from Western Australia, John Miles CF 1998 from Victoria and Ian Tolley CF 1966 from South Australia, Brian Wilson CF 1966 from Queensland.

Each recipient was presented with a letter outlining their contribution to the Churchill Trust and a limited edition botanical illustration print of a Sir Winston Churchill rose drawn from life by 1988 Churchill Fellow Gilbert Dashorst (CF 1988). Gilbert is one of Australia’s leading botanical Illustrators. He has illustrated many thousands of botanical artworks during a career spanning more than 30 years. His illustrations are housed around the world in private collections from Royal Houses in Europe (Royal House of Denmark) through to art collections in Australia.

Gilbert’s detailed pencil enlargements of the Churchill rose show not only the flower but also parts of the plant that may not be usually seen, which are important in identifying the species. The original botanical illustration is displayed at Churchill House in Canberra.

Mick was a member of the ACT Regional Selection Committee from 1976 until 2011 – a remarkable contribution over thirty-five years. He was also instrumental in the establishment of the ACT Churchill Fellows Association. 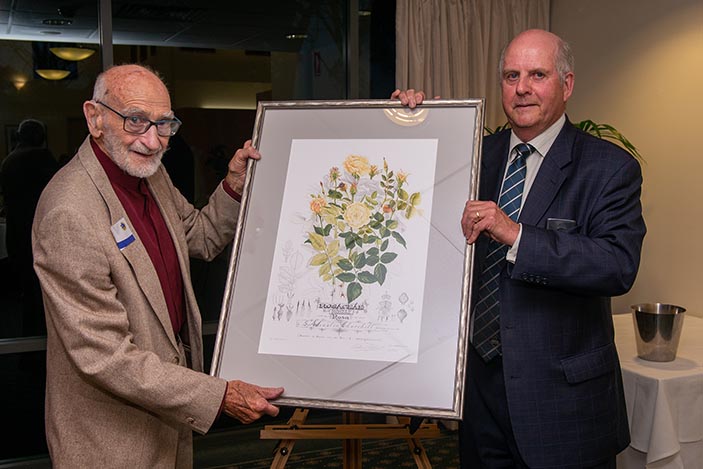 Anne has been an active member of the CFA of Western Australia and was Treasurer for twenty years. She has been a regular participant at CFA and Trust functions over that period and has actively promoted Churchill Fellowships. 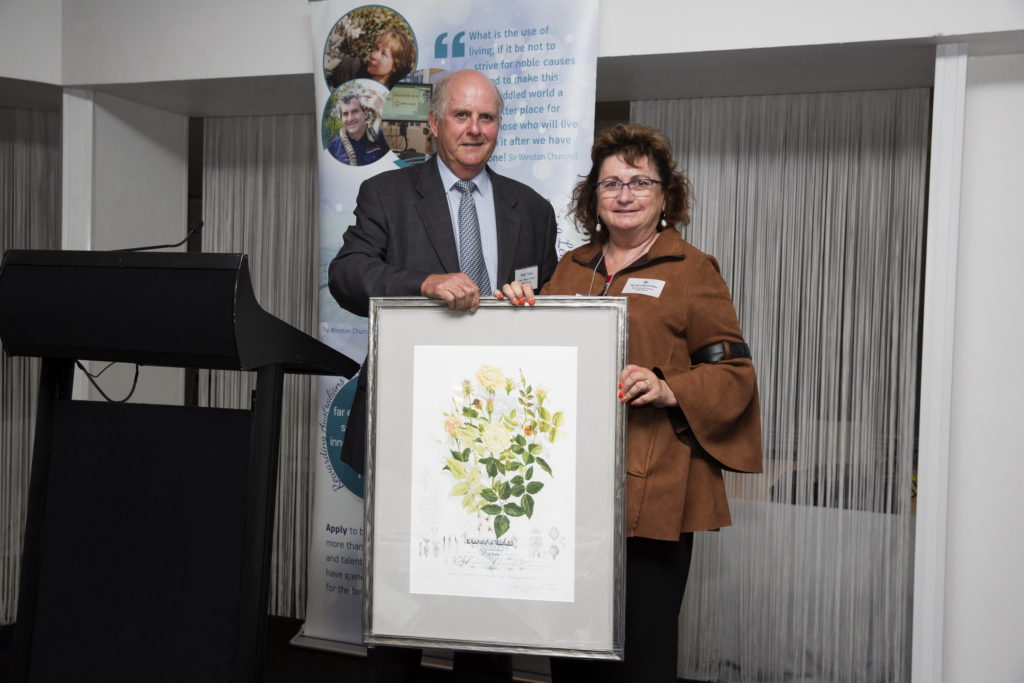 Ian has been active membership of the NSW CFA since the early 2000’s, and has been President for the last 3 years. He has organised many local CFA events and activities, such as Winston Walks and Churchill Chats, and routinely volunteers to run information sessions across the state, often travelling to regional areas to encourage more people to apply for Fellowships. Ian served on the NSW selection committee Public Service Panel in 2009 and 2010 and has been on the NSW Regional Committee since 2011. 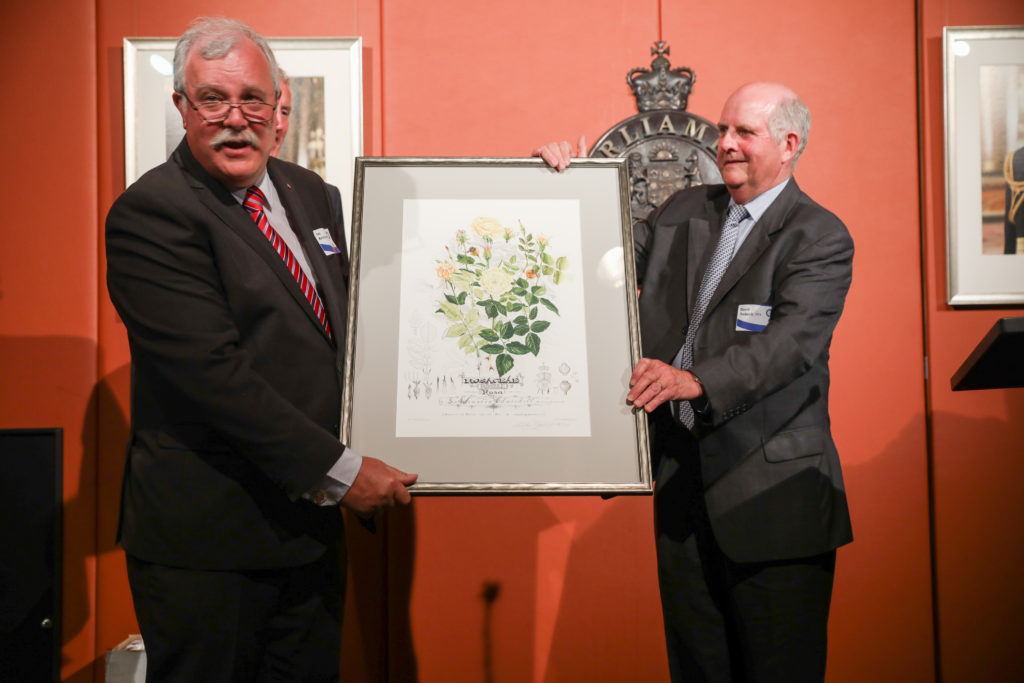 Ian has been an active member of the Churchill Fellows Association of South Australia since its inception, a remarkable contribution. His life membership of the CFA SA is a testament to the high esteem in which he is held. He has been involved in many local CFA events and activities. 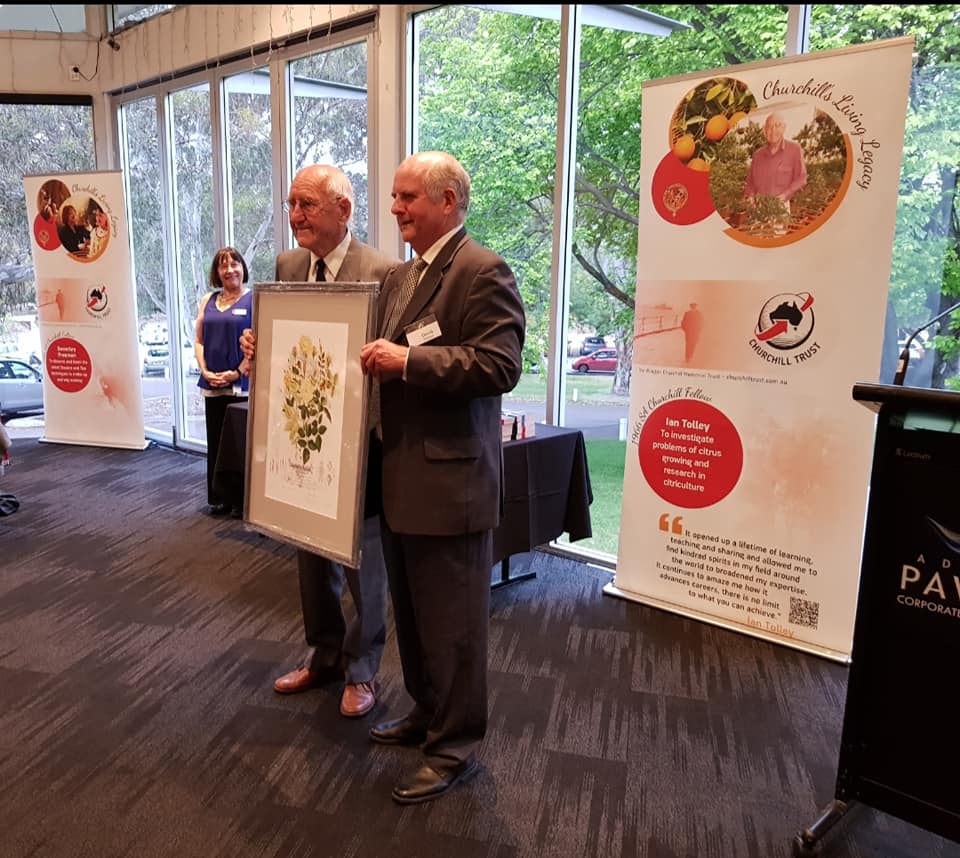 Patricia has been an active membership of the Tasmanian CFA for more than 30 years, including being President in the 1980’s and Secretary since 2004. She has been dedicated to maintaining links with early Fellows and ensuring that transport and assistance has been provided for them to attend CFA functions. Her dedication to ensuring the success of the 2019 National Churchill Fellows Association Convention in Hobart was outstanding and the success of the Convention is in no small part due to her efforts. Patricia also coordinated the publication of Bringing Knowledge Home: Tasmanian Fellows 1965-2015, published in 2016, which has provided an invaluable history documenting the achievements of nearly 200 Tasmanian Fellows. 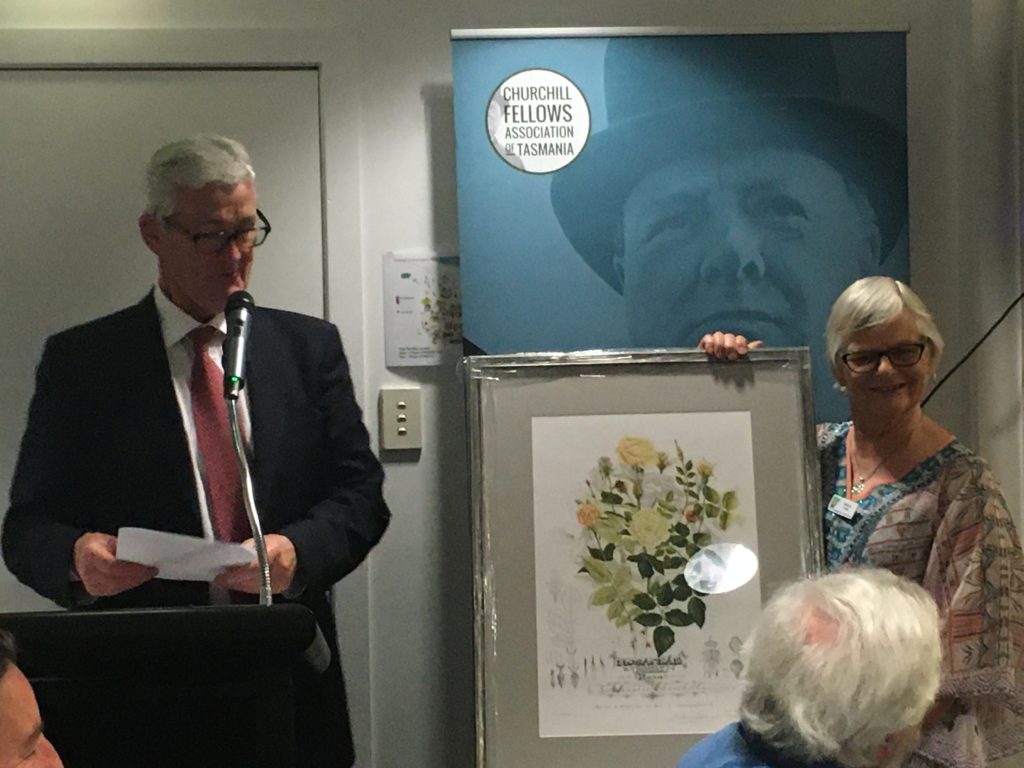 John has had a long association with the Trust. He facilitated office space for Regional Committee meetings a period of fifteen years and has actively promoted Churchill Fellowships through his agricultural contacts for many years. John has been a member of the Victorian Regional Selection Committee since 2012.

Brian’s first involvement with the Trust came when he and his son knocked on doors on Churchill Appeal Sunday, 28 February 1965, for the fundraising campaign to establish the Churchill Trust. His Churchill Fellowship allowed him to study treatment of glaucoma in the USA, the UK, Germany, Switzerland. He had a long-standing personal commitment to the ongoing success of Churchill Fellowships in Australia as a member of the Queensland Regional Selection Committee from 1972 until 1979 and an active member of the Queensland Churchill Fellows Association. His commitment continued in a generous endowment made in memory of his first wife, Dorothy, establishing the biennial Dorothy and Brian Wilson Sponsored Fellowship to Investigate Strategies Aimed at Making a Difference in the Lives of Disadvantaged Children Though Education and Training, which has enabled six Fellowships to be awarded since 2008. 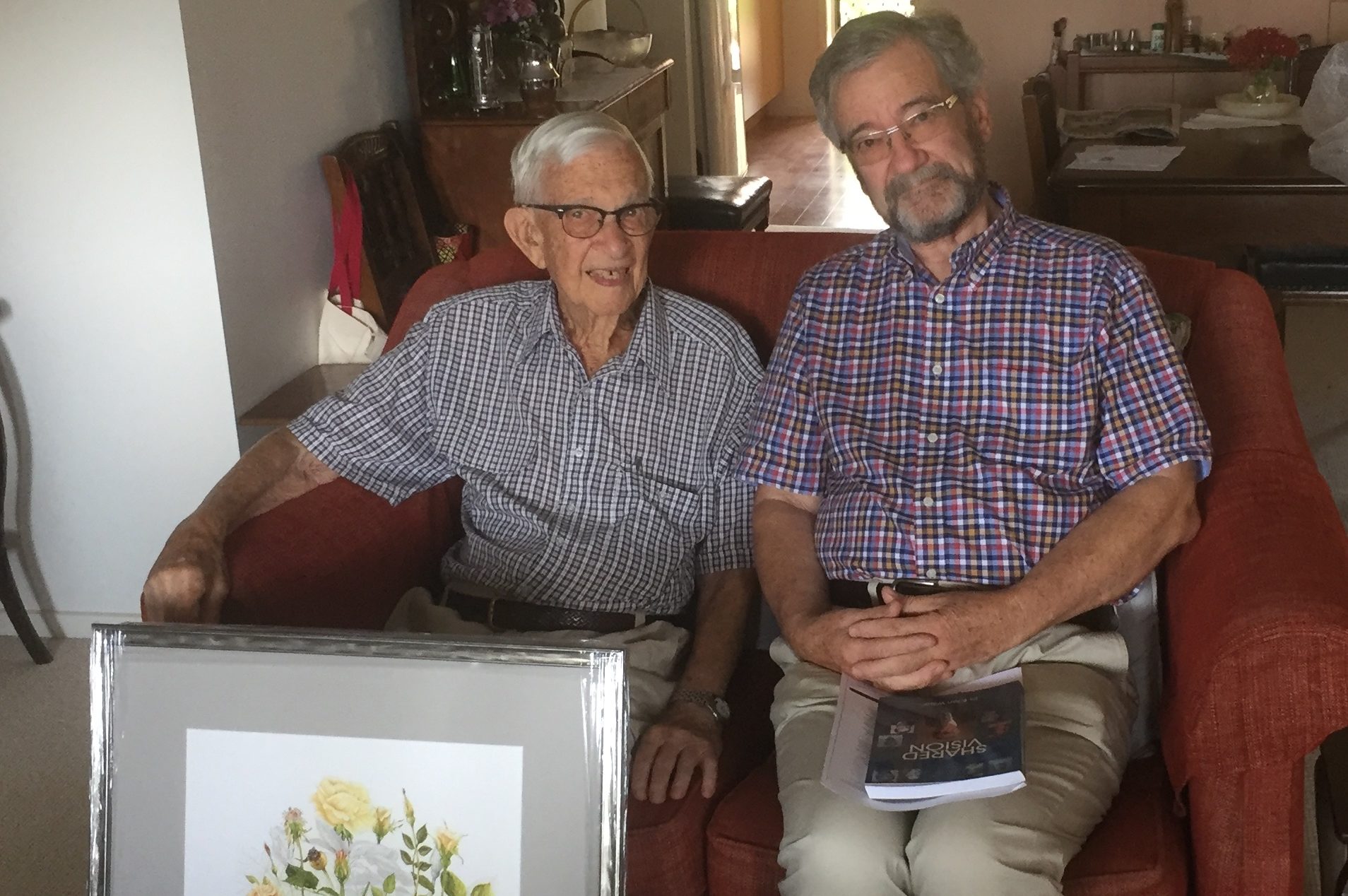 Drawn from life, sketched in pencil, 1988 Churchill Fellow Gilbert Dashorst used three Windsor and Newton gouache colours – Bengal Rose, Peacock Blue and Brilliant Yellow – to capture the rose accurately from nature. Gilbert’s detailed pencil enlargements show parts of the plant that may not be usually seen,  but are important in identifying the species (juvenile leaf, adult leaf, flower dissections, fruit dissections and seeds). The botanical description refers to the Family name, genus and common name, along with the name of the person who developed the plant. The first Sir Winston Churchill rose was bred in 1955 by Alexander Dickson III. Cv is short for ‘cultivar’ and means the plant was developed by a plant breeder. At the bottom of the illustration you can see the word ‘del’, of Latin derivation and shorthand for the word ‘delineate’, which means ‘to draw’. A strictly limited hand numbered edition of 100 prints has been made on archival paper. Gilbert’s original botanical painting of the ‘Sir Winston Churchill’ rose is publicly displayed at Churchill House in Canberra.

Gilbert Dashorst (CF 1988) is one of Australia’s leading botanical Illustrators. He has illustrated many thousands of botanical artworks during a career spanning more than 30 years. His illustrations are housed around the world in private collections from Royal Houses in Europa (Royal House of Denmark) through to art collections in Australia.

Gilbert graduated from the North Adelaide School of Art in 1980 before travelling to Europe as a freelance illustrator for two and a half years.  Returning to Adelaide in 1983, he started as the botanical illustrator for the Botanical Gardens of Adelaide and the State Herbarium, illustrating plant material for scientific publications world-wide, a position he held for almost 30 years. In 1988, a Churchill Fellowship enabled Gilbert to spend 5 months working with botanists and botanical artists in Leiden (the Netherlands) and one month at Kew (England) enhancing his botanical illustration skills and research into Australian botanical artists.

Gilbert co-authored and illustrated Plants of the Adelaide Plains & Hills with John Jessop, which is now in its 3rd edition and Grasses of South Australia: an illustrated guide to the native and naturalized species with John Jessop and Fiona M. James (2006). He has taught scientific illustration at TAFE and to botany students at the University of Adelaide. He has undertaken solo exhibitions at the Adelaide Fringe and the Adelaide Festival. He is now a full-time artist and art teacher.

In South Australia Gilbert’s work is publicly displayed in the Royal Adelaide Hospital, Hampstead Rehabilitation Centre, Migration Museum in Adelaide, the South Australian Maritime Museum, the Adelaide Federal Court House and many other venues. His work has been sought after by many collectors and business houses in Australia, Austria, Belgium, Canada, United Kingdom, Germany, Japan, The Netherlands, New Zealand, Scotland, South Africa and the United States of America.

As a horticulturalist Ian Tolley particularly appreciates the hundreds of hours of work which went into the creation of the drawing of a Churchill Rose which totally to scale and accurate.