David Trebeck (1974) is immediate past President of the ACT Divisional Council of the Australian Institute of Company Directors and Chair of Australia’s Oyster Coast Pty Ltd, Delos Delta Pty Ltd and AOC (Oyster Investments Ltd). He is also Alternate Director of the Ginninderry Joint Venture Board.

Mr Trebeck is a former Commissioner of the National Water Commission (2005-08), a former non-executive director of several ASX companies and former adviser to the local subsidiary of the world’s largest shipping company, AP Møller Maersk. In 1983, he co-founded (and was later CEO of) ACIL Consulting (now ACIL Allen), from which he retired in 2004. He has also held senior positions with the National Farmers Federation and its predecessors (1972-83).

Mr Trebeck was awarded a Churchill Fellowship in 1974 and a Centenary of Federation Medal in 2001. 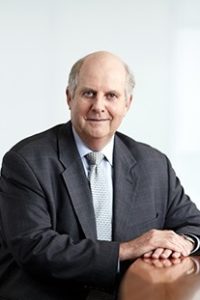